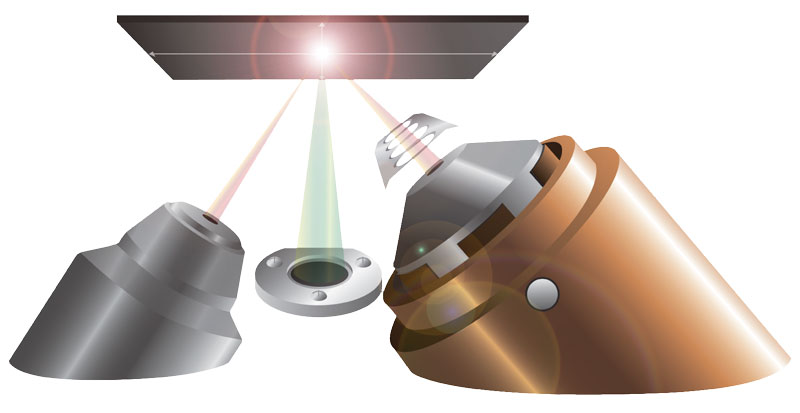 Energy dispersive x-ray fluorescence (ED-XRF) relies on the detector and detector electronics to resolve spectral peaks due to different energy x-rays. It wasn’t until the 1960’s and early 1970’s that electronics had developed to the point that high-resolution detectors, like lithium drifted silicon, Si(Li), could be made and installed in commercial devices. Computers were also a necessity for the success of ED-XRF even if they were often as large as the instrument itself.

Hardware: ED-XRF is relatively simple and inexpensive compared to other techniques. It requires and x-ray source, which in most laboratory instruments is a 50 to 60 kV 50-300 W x-ray tube. Lower cost benchtop or handheld models may use radioisotopes such as Fe-55, Cd-109, Cm-244, Am-241 of Co-57 or a small x-ray tube. The second major component is the detector, which must be designed to produce electrical pulses that vary with the energy of the incident x-rays. Most laboratory ED-XRF instruments still use liquid nitrogen or Peltier cooled Si(Li) detectors, while benchtop instruments usually have proportional counters, or newer Peltier cooled PIN diode detectors, but historically sodium iodide (NaI) detectors were common. Some handheld device use other detectors such as mercuric Iodide, CdTe, and CdZnTe in addition to PIN diode devices depending largely on the x-ray energy of the elements of interest. The most recent and fastest growing detector technology is the Peltier cooled silicon drift detector (SDD), which are available in some laboratory grade EDXRF instruments.

After the source and detector the next critical component are the x-ray tube filters, which are available in most ED-XRF instrument. There function is to absorb transmit some energies of source x-rays more than other in order to reduce the counts in the region of interest while producing a peak that is well suited to exciting the elements of interest. Secondary targets are an alternative to filters. A secondary target material is excited by the primary x-rays from the x-ray tube, and then emits secondary x-rays that are characteristic of the elemental composition of the target. Where applicable secondary targets yield lower background and better excitation than filter but require approximate 100 times more primary x-ray intensity. One specialized form of secondary targets is polarizing targets. Polarizing XRF takes advantage of the principle that when x-rays are scattered off a surface they a partially polarized. The target and sample are place on orthogonal axis’ to further minimize the scatter and hence the background at the detector.

ED-XRF can be used for a tremendous variety of elemental analysis applications. It can be used to measure virtually every element form Na to Pu in the periodic table, in concentrations ranging from a few ppm to nearly 100 percent. It can be used for monitoring major components in a product or process or the addition of minor additive. Because XRF’s popularity in the geological field, ED-XRF instruments are often used alongside WD-XRF instruments for measuring major and minor components in geological sample.

For more details about the XRF technique please visit LearnXRF: